William Tyree in the Civil War, part one


William Tyree was born 4 August 1839 in Scott County, Virginia to James Tyree and Elizabeth Hall.  He first married Ellen/Eleanor Forgey, daughter of Archibald Forgey and Eleanor Roller 2 August 1859, probably also in Scott County. Ellen died 18 October 1878 in Rockcastle County, Kentucky. William then married Sarah Jane McLemore on 2 August 1879, still in Rockcastle County. Sarah was the younger sister of William’s son-in-law William McLemore. Shortly after that William and Sarah moved to Crawford County, Indiana where they are found in the 1880 census with three of the eight children from William’s marriage to Ellen and the first of what would be nine children of Sarah. William died in Crawford County 4 November 1911 and is buried in Goodman Ridge Cemetery. His stone reads Wm. Tyree, Co. G, 14 Ky. Cav.

My mother, Verlie Ahlemann Harvey, spent a lot of time with her grandmother Lou E. Tyree Sowder, daughter of William and Ellen. Grandma Sowder was only ten when her mother died, but she had talked with her enough to have some family stories. One was that when they moved to Kentucky Ellen had to drive the wagon and William had to hide in the woods by the side of the road whenever anyone came near. He was trying to avoid fighting in the Civil War. When I started getting interested in genealogy back in the 1970’s Mom got in touch with some of the children from the “second marriage” that still lived in Crawford County. They directed her to Goodman Ridge Cemetery and the 14th KY grave marker. And their story was that he had gone to Kentucky, signed up and fought with the Union Army, but threw his gun down and headed home when he heard the war was over. Thus no discharge and no pension.

I lived with that discrepancy for quite a few years but it never stopped bothering me. As I had time over the years I learned more about genealogy research and sources. When I found out that there were records at the Indiana State Archives of the 1886, 1890 and 1894 registrations of Civil War veterans, widows and orphans I planned a trip to Indianapolis. I was so excited! My questions would finally be answered. But the registration from Crawford County did not show William as being in the 14th KY. Instead it showed his service as being with the USA 8th Tennessee, Company K. So I checked Tennesseans in the Civil War and found an entry for (USA) TYREY, William: Blacksmith, Co K, 8th TN Cav. Next step was requesting his services records from the National Archives. Yes, William Tyrey enrolled in the 8th Cav. Co K as a blacksmith on 20 September 1863 in Hancock County, Tennessee (just over the state line from his home in Scott County, Virginia). He mustered in on 27 October 1863 in Knoxville, Tennessee. There was only one other card in the file, showing that he had a bounty due of $25 plus a premium of $2 that had never been paid.

Years passed and I still didn’t have an answer that was at all satisfactory. I debated with a researcher from the “second marriage” about our differing perspectives without resolution. Then one day I had an email from him. He had been browsing one of Ancestry’s new databases, General Correspondence of the Record and Pension Office and found this: 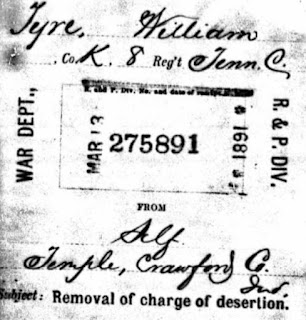 This was definitely our William Tyree. But desertion? I had to know more so hired a researcher in Washington, DC to get the underlying correspondence for me. In a few weeks I had one of those goldmine packages every genealogist hopes to get in the mail.